Before you go, check this out!

We have lots more on the site to show you. You've only seen one page. Check out this post which is one of the most popular of all time.

Whether you grew up working on a farm or just have a love for antique tractors, most of us have wondered at one time or another, “why do some tractors have narrow front ends and some have wide front ends?” Darn good question, read on for a few reasons why.

There are several reasons that tractors with narrow wheels up front were quite popular for many decades. The most important one is that there was no power steering on those tractors and narrow fronts were able to turn in a very short radius which was a big plus for farmers trying to get the most efficient use of their land. When the driver came to the end of row, it took much less room to swing the narrow front tractor around to go back the other direction.

The fact that they are so maneuverable is evident still today in tractor square dancing shows put on at fairs and tractor shows across the Midwest. These shows are quite the crowd pleaser and very entertaining. The video below demonstrates their nimbleness during one of these square dancing shows.

Other Benefits of Narrow Front Wheels

One of the selling points of old tractors were their ability to run stationary machinery like mills, threshers, conveyors, grinders, buzzsaws and much more. Although it wasn’t absolutely necessary, a narrow front on the tractor meant there was nothing to get in the way of the belt used to drive that machinery.

If you notice in the picture above of the F-20 the drive pulley is off to one side and down a bit. A lot of belt driven equipment would be positioned in front of the tractor and connected by a long wide belt. A wide front axle could cause the belt to slap and wear out prematurely.

Belly mounted cultivators were also available for both wides and narrows but I think the advantage goes to the narrow front because of the tight turning radius. For taller crops like corn, a narrow front would do less damage as the plants grew taller than the axle on a wide front.

Before combines became popular, it was common to mount a 2-row corn picker on a narrow front tractor. The narrow front was necessary for this type of harvesting as the narrow wheels up front were centered between the two rows of corn being picked. 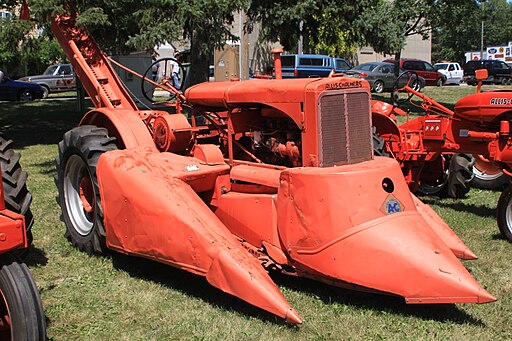 In the 1950s corn combines started to become a dedicated piece of machinery that could both pick and shell the corn. They could do many more rows at a time so eventually the two-row corn picker fell out of favor for the larger more efficient combine.

Narrow front wheels were often set as a “V” with tops tilted outward and where the wheels met the soil they were very close together. This resulted in the tires tracking nicely in the bottom of the furrow which helped to keep the tractor driving in a nice straight line.

Some narrow front tractors even had a single wheel up front that also accomplished the same results. The single wheel was a little wider than each of the tires in the “V” configuration but about the same width as both of them put together. This single wheel would ride perfectly in the bottom of the furrow making steering a breeze.

Drawbacks of the Narrow Front Tractor

In the early years of tractors right up into the 1960s the narrow front tractor was quite popular and there are many thousands of them still around today. Some are still being used as working tractors and many more have retired a life of restoration and shows.

The fact that all tractors sold now are wide front is proof that there are some drawbacks to the narrow front end. Other innovations of modern tractors and farming techniques have made some of the advantages of a narrow front end obsolete.

The narrow front tractor considerably less stable driving parallel on a hillside. Especially dangerous was making a sharp turn while the tractor was on an angle. There have been many fatalities from tractor rollovers over the years. In fact, according to Wikipedia, more than half of all tractor related injuries and deaths are attributed to tractor rollovers.

The Introduction of Power Steering

Power assist became popular in the 1950s as tractors started getting bigger and bigger. True power steering became available on tractors in the 1960s then became pretty standard on today’s modern tractors.

Antique tractor enthusiasts are typically going to lean to either narrow fronts or wide fronts, but no matter what camp you’re in, I think there is a love and respect among the community for all antique tractors and the history behind them that helped make the world into what it is today.

I love working around our homestead doing chores, building projects, taking care of our critters and livestock, making maple syrup, and messing around with old mechanical equipment.

It may take more than one technique to successfully keep your chickens out of your garden, such as fencing, building raised beds, natural deterrents, or even building them their own garden and...

Continue Reading
link to Is Honey Bee Farming Profitable? Here Are the Facts

Profiting from honey bee farming takes dedication, as it can take some time for the products’ sales to offset the initial equipment costs. But, with good hive management and conditions, most...

Part of a larger homesteading family, Maria and Corey Sitkowski enjoy their small Michigan homestead by raising poultry, growing fresh produce, making maple syrup and providing for themselves as much as possible. Corey is an antique tractor enthusiast, woodworker, and general fix-it or build-it guy. Maria is an excellent cook, and enjoys many crafty hobbies such as crocheting, soap making, and has a knack for learning how to make just about anything she wants. To learn more about us, click the button below.